Robert Breitbach Consulting has been active in Estonia as a retained and independent International Executive Search Firm, managed by its proprietor. Our focus are the technical industries of Estonia.

We would like to share an article we found on www.ferretingoutthefun.com about the Kadriorg Palace "A Museum Fit for a Queen":

Kadriorg Palace in Tallinn, Estonia is a relic of a bygone era. It was built in 1718 by Peter the Great, founding czar of the Russian Empire. The palace’s salmon pink facade, accented with slate blue doors and a green copper roof, was designed in the same ornate style as the buildings of Petersburg, the Empire’s new capital. As I strolled through Kadriorg’s manicured gardens, I imagined matched pairs of horses pulling fancy barouches up to this Baroque beauty, as the crème de la crème of Estonia’s Baltic German aristocracy arrived for a ball. After the Russian Empire fell 200 years later, this former Romanov residence became the Kadriorg Art Museum of Estonia, which it remains to this day. It contains the largest foreign art collection in Estonia and is an essential stop on any Tallinn itinerary.

The two most important women in the life of Peter the Great were his mother and second wife, Catherine. It was said that the ever-cheerful Catherine was the only person who could calm his fits of rage and epileptic seizures. Peter relied on her to such an extent that she even traveled along with him to battle. At the time, the young czar was embroiled in the Great Northern War with Swedish King Charles XII. Sweden controlled the Baltic provinces of Livonia (Latvia) and Estonia, and with them entrance to the Baltic Sea and its profitable trade routes. That is, until Peter and his vast army effectively dismantled the Swedish Empire. (You can read about the fateful first battle in my post about Narva.)

Wanting a place where he and Catherine could relax far from the battlefield, Peter purchased a small manor in his newly acquired province of Estonia. Peter was quite happy in this humble abode, but knew his wife would enjoy something more regal. The new palace was named Katharinental, German for “Catherine’s valley.” Peter reportedly laid the foundation stones with his own bare hands. Now that’s what I call a labor of love! 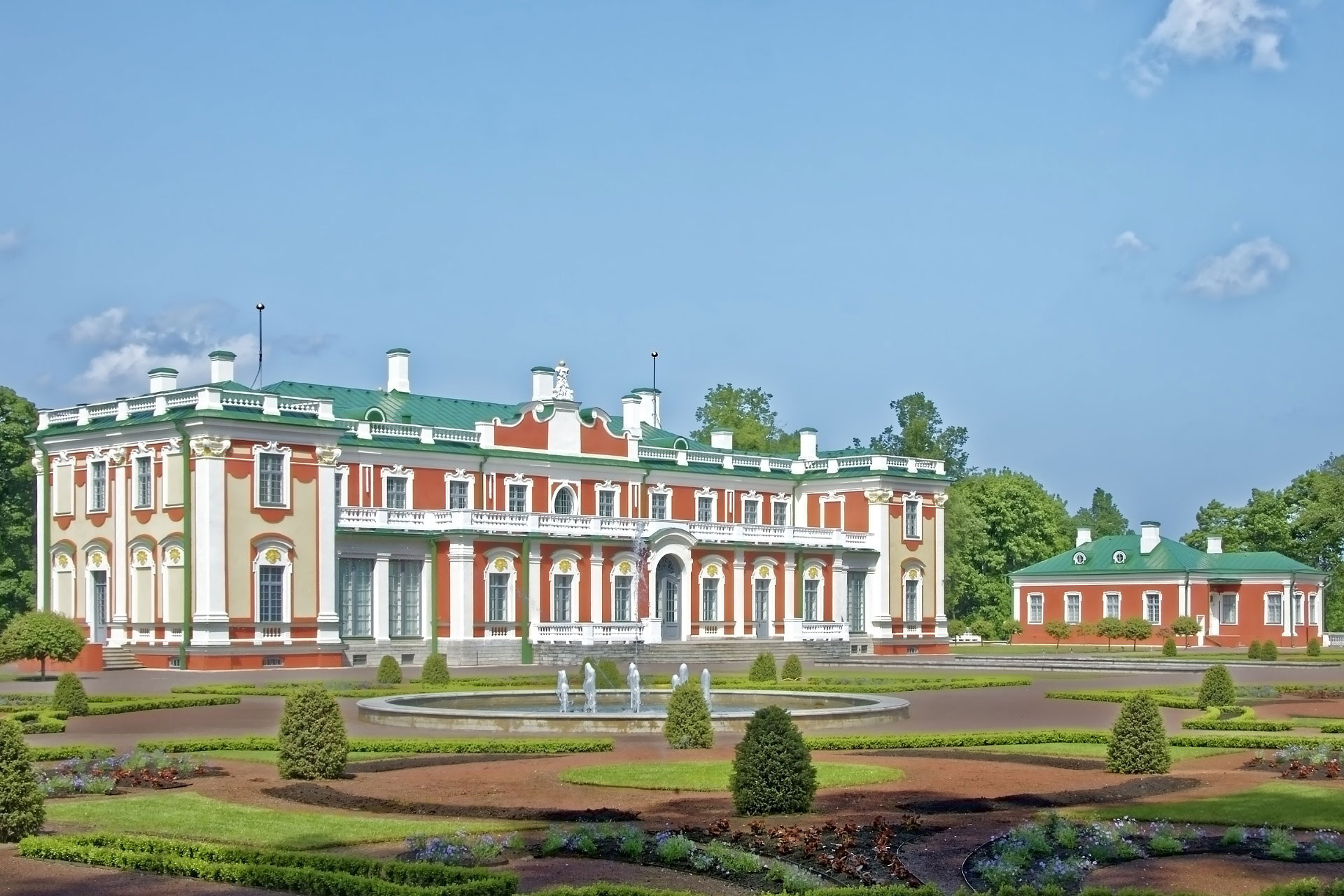 The interior of Kadriorg Palace has been much altered over the years, but the exquisite grand hall remains as it did in Peter’s day. The painted ceiling is framed by intricate stucco work embossed with Catherine’s initials. Museum curators have left this hall blessedly bare, letting the 18th century fresco shine.

An impressive array of artifacts is on display throughout the rest of the palace. The museum has over 60,000 pieces in its collection so exhibits change often. At the time of my visit, beautiful dresses were given center stage. Russian paintings and Meissen porcelain decorated the ground floor galleries, while artworks by the Dutch masters hung upstairs. Cases in a wood-paneled room were filled with silver objects from Tallinn’s guilds and treasures by the House of Faberge.

The small manor where Peter and Catherine Romanov stayed while the palace was being constructed has been turned into the Peter I House Museum. It is filled with the furnishings used by the royal couple. Peter the Great was a man of surprisingly simple tastes and it shows. I recommend watching the museum’s 10-minute film for a better understanding of the czar and the impact his forward-thinking policies had on Russia and northern Europe.

Kadriorg Palace is located a short distance outside the medieval walls of old Tallinn. To get there via public transport, take trams 1 or 3 to the Kadriorg stop. There is also free parking near the Peter I House Museum should you wish to drive. A small cafe inside the palace is a serviceable option for lunch. Notable buildings in the neighborhood include the Estonian Presidential Palace and Kumu Art Museum, a repository of Estonian art.

"Do not go where the path may lead, go instead where there is no path and leave a trail."
Ralph Waldo Emerson (1803-1882), American Philosopher